Posted on April 2, 2012 by writerladyjane

Saturday’s New York Times has a front page article on the experience of solitary confinement in prison.

I read the newspaper at my dining room table, and glance through the windows.  One wall, across the living room is taken up with wide, sliding glass doors that allow me to see the garden. Splotches of color already announce that spring is on the cusp, and will soon bring warmth and flowers.  Over my left shoulder, I glimpse the arbor, the driveway and a pink flowering tree that’s about a third in flower.  The remaining dark pink buds are tightly shut, waiting for sun, which they won’t find today. 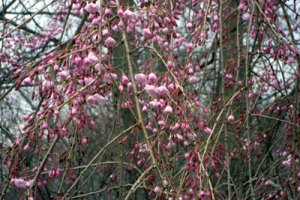 Only the early blooming PJM azalea braves the cold, as it thrusts out its bold, lavender flowers as if to say, “I don’t care about the chill.  I just want to be first.”

Beauty, appreciation for the natural world and all creative thought would be eliminated from my life if I were in prison.  The Federal Prosecutor, in 2005 – 2007 created an enormous fear in me by calculated threats.  Perhaps they were intended only as nudges, to see what I would do with such intimidation, but I believed everything.  Today, I know it’s extremely unlikely  – really, impossible – that I would ever personally encounter the prison system.

Ernesto Lira, the man in the newspaper article, was found guilty of belonging to a gang, and in California, in order to control gang violence in prisons, was placed in solitary confinement for eight years. He was not a member of a gang, but no one bothered to find out the truth.  Like so much in the corrections system everywhere, plenty of errors are made, especially if the accused doesn’t have the benefit of a good lawyer.

The last paragraph in the N.Y. Times article stunned me with the description of what this man experienced.  “You take a person and you just peel back the skin and make him some raw flesh in a tomb and all he has is his mind.  Your feelings, your anxieties, your doubts, your health, your happiness, your spirit, who you are, who you think of – that’s the only thing that keeps you going in there.”

I can’t imagine existing alone in a small room for 23 hours out of every day.

My former husband Paul spent months in solitary confinement in several of the prisons in which he was placed.  Federal prisoners are routinely moved around from place to place, for no obvious reason.

Corrections Officers, as prison guards are called, must keep track of what the gossip is – to keep order and to protect those who might be targeted – beaten up or killed.  Prison isn’t a safe place.

Always unable to moderate and control what he said, Paul spent six months in solitary confinement, for his own protection.  An unscrupulous and talkative guard possibly saw his prison records or perhaps Paul conversed too openly with the wrong person.  Somehow the reason for his incarceration was in the wind and another prisoner made threats, that were heard by the guards.  His safety was in jeopardy, so he was locked up for six months, alone, for his own protection.

Later on, in a different prison, he was again put in solitary confinement for breaking a rule.  He’d been told by correction officers he couldn’t save the orange peel flowers that he’d been creating.  Others had said he could.  A double standard.  It was the only object he could make with material that was available and satisfied his artistic urge.  In detention, there’s no second chance for breaking a prison statute. There’s only swift punishment.

The newspaper article and thoughts of solitary confinement weigh upon my heart as I look through the windows and appreciate the life I have.

I'm a writer with an almost completed memoir, titled The Invasion. Most of the blog posts relate to the general subject of my memoir and are about my experience of Federal Agents entering my home and arresting my then-husband for child pornography, as well as the following two years of threats on me. There are also posts that are of a lighter nature and some to do with my travels, especially a trip around the world I took with my daughter. I have an MFA in creative writing from Fairfield University and live in Westport, CT.
View all posts by writerladyjane →
This entry was posted in Uncategorized and tagged current-events, nature. Bookmark the permalink.