Out of Control Weather – Beijing Flooding

Posted on August 6, 2012 by writerladyjane

Weather. Uncontrollable, unpredictable. Even those weather channel addicts acknowledge that conditions can change dramatically from what’s predicted. I personally ignore the latest temperature and weather forecast and prefer to look out the window or open the front door and sniff the air. On July fifteenth it was impossible to miss warnings of imminent dangerous conditions, as we prepared to leave on our trip to China.

At JFK, our group of twenty six was advised we could board the flight, and then sat in the airplane for another hour and a half. We watched the lightening dance continuously around us. The roar from the downpour drowned out any sound spoken inside.

Twenty hours later, dazed and exhausted, we dragged our luggage behind us in Beijing, as we followed our tour guide to the bus. We drove another hour to our hotel and finally, went to sleep at 3:30 AM.

The next day, the rain started lightly during our boat cruise in Dragon Valley, where the lake rose up the sides of vertical cliffs, providing an experience similar to the Norwegian fjords.

In the afternoon, we took rickshaws through narrow lanes that were part of old Beijing, on the way to the private home where we were scheduled to have lunch. Rain cascaded down on us, while we sat on the inadequately protected seat. Nothing was visible as the bicycle rickshaw whipped around the corners of the back street alleys.

It would have been nice if we could have communicated with the woman who cooked the meal. All we could see, across the narrow hall, was her back, as she prepared dish after dish in her miniature kitchen.

We listened to the rain slam on the concrete path between buildings. This walk led directly into the family’s small room, where we sat around three round tables.  Canaries and other birds in hanging cages outside the open windows jumped around, as raindrops splashed them.

The man of the house stood pleasantly at the door and answered some questions.  With pleasure, he pointed out a Canadian flag, left as a gift by an earlier visitor. A much younger man translated and told us that our host provided this sort of lunch to groups about two to three times a week. It provided additional income for the family. He said he welcomed North Americans and Europeans to his home, but not Japanese.  Memories of WWII atrocities linger still.

Ripples along the path were larger and ran faster with the increasing rain.  I wondered if the water level would rise enough to enter their small home, if they would suffer dire consequences from the threatened flooding.

I bought a flimsy plastic raincoat, made from material that was similar to what dry cleaners use, that ripped as I put my arm through one of the sleeves.

We drove to many of the Beijing sites, including the Seventeen-Arch bridge. The pounding of the rain on the hundreds of umbrellas on this bridge sounded like the running of race horses.  It was the beginning of the most severe flooding in Beijing in sixty years. 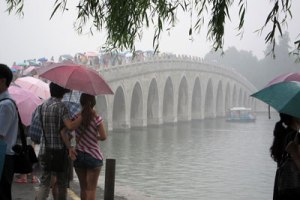 When it was time for dinner, our bus parked in the street and we all began to walk to the restaurant. Red lights, from the restaurant’s sign, smeared before our eyes, as sheets of rain blurred the scene.  The opaque red glow lit up the car parking area, which sloped downward towards the building.  A rushing waterway filled this low section.  We walked along a flimsy, poorly balanced, wooden plank that went over the deepest water.  When we entered the building, the restaurant workers, women in long skirts and elegant shoes, worked endlessly to squeegee water off the white marble of the entrance hall.

After our meal, we found the water even deeper than when we’d entered. I was afraid that the piece of wobbly wood would be too insecure to step on, so went around to a different location, which turned out to be worse. I stepped in brown, rushing water that surged past my knees.

Our bus driver skillfully maneuvered the bus around cars and other large tourist busses stuck in the high water, motorcyclists and bicyclists walking in the swirling tan liquid. The next day, we read in the China Daily newspaper about those whose vehicles were abandoned in the deluge. Eighteen inches of rain had fallen in twenty-four hours and, days later, reports stated that at least seventy-seven people had died in the 2012 Beijing floods.

I'm a writer with an almost completed memoir, titled The Invasion. Most of the blog posts relate to the general subject of my memoir and are about my experience of Federal Agents entering my home and arresting my then-husband for child pornography, as well as the following two years of threats on me. There are also posts that are of a lighter nature and some to do with my travels, especially a trip around the world I took with my daughter. I have an MFA in creative writing from Fairfield University and live in Westport, CT.
View all posts by writerladyjane →
This entry was posted in Uncategorized and tagged Beijing flooding, China, rickshaw, unpredictable weather. Bookmark the permalink.