Posted on February 9, 2013 by writerladyjane

In January, we went to Costa Rica, part of a stimulating, active group of 15 people along with an exceptionally well informed and intelligent leader. She was kind to everyone and all of us, without exception, adored her. Natalia was everything one could hope for in a guide.

After a ride across Arenal Lake, in the shadow of the volcano, we visited a pineapple plantation and were taken to the fields in a wagon, pulled by a John Deere tractor. The man who escorted us had clearly memorized his questions to humorously expose our ignorance. Most people laughed at his shtick, while we learned how to select the perfect, juicy fruit.

This pineapple farm is owned by an American company located in Texas that’s been around for decades – Collins Street Bakery. Perhaps your family received a fruitcake from them as a gift, in a red metal box, when you were a child. A thin slice of fruitcake, especially if it had a dollop of hard sauce, the way my mother served it, was delicious. Extremely rich, it lasted for months.

The workers who tend the fields and perform all the other labor must know that the company they work for is an American corporation that supplies pineapples to Dole. They must also know that most of the income in that part of Costa Rica is from tourism.

While traveling along the rutted paths through the various growing areas, we saw men and women leaving the fields at the end of their work day. Most held on to the sides of the carts that wobbled back and forth. Their heads and necks were covered with scarves and hats to keep off the sun.

I interpreted expressions on some of their faces as hostile. But perhaps they were just tired, and not resentful that we were Americans, on a holiday. Or maybe they were hungry and anxious to get to where they’d be able to exit the wagon and have something to eat. Perhaps I was mistaken, and they were merely curious, watching yet another load of tourists, just because we were there in the same part of the field with them. I felt privileged, as I thought of their back-breaking work and the way they meticulously picked each pineapple at the exact peak of ripeness.

Back at the building, we watched scores of pineapples automatically washed, slithering along a conveyer belt. 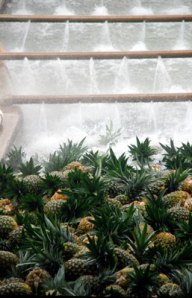 After sensing their fatigue and wondering about the unfriendliness of the pickers, I was glad to see the camaraderie between those who did the final sorting. Although I couldn’t hear the conversations, their expressions were happy as if they were enjoying each other’s company, while they worked.

I grinned as I saw a woman erupt in a belly laugh. What was the joke? Working on a pineapple plantation could be fun. I was glad to see that part of the job, too. 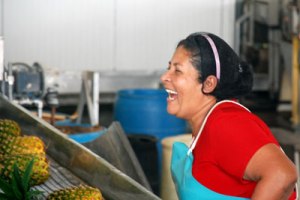