Posted on February 23, 2013 by writerladyjane 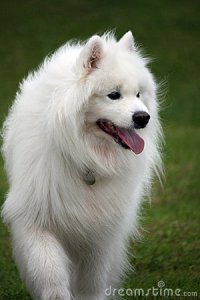 Sam the Samoyed Saves the Day

My name is Sam and I am a fluffy, white Samoyed. I have a big smile and I love people. Last night, around eight o’clock, a robber stole one of my puppies. The puppy’s mother was really upset and asked me to find it. This is that story.

I barked really loudly at Jason, my owner.

I dashed over to the wooden dog sled that was outside.  Jason followed me to the sled.  I got a hold of the harness and dropped it in front of him.  He picked it up and looked at me.

I scampered over to the rest of the puppies. Jason was astonished to see that one of them was missing.  There were only seven. There should be eight.

I dashed back to the harness and Jason understood that he should put it on me.

Jason hooked me up to the old sled and we took off into the woods. There was a lot of snow on the ground and it was hard to see because there was snow falling.  It’s a good thing that there was a light attached to the sled.

We went in the direction where I had seen the robber. I was cold even with my thick fur. Jason seemed cold too.

In the distance, I heard a loud roar.  It became louder and louder the closer we got to the sound. Jason became a little scared and took a knife out of his pocket. He took the sheath off the sharp knife.

Suddenly, a big polar bear with long sharp claws and pointed teeth appeared in front of us. It slashed the leather harness off me. He came even closer.  I barked at him as loud as I could. The polar bear became scared and ran away, through some pine trees. I felt relieved that he had left.  Jason seemed thankful too that the bear had run off.

He put the knife back in the sheath and then in his pocket.  He knew that the knife wouldn’t have protected him. Jason thought he should have brought his gun and was glad he didn’t need it. My barking saved the day.

Jason repaired the harness with duct tape and we were ready to go again.  We came upon a stone wall.  I stopped fast and Jason unhooked me.  I climbed over the wall alone and Jason managed to get the sled over the wall. When he hooked me back to the sled I wouldn’t go because, in the distance, I saw the robber with the puppy. Jason quietly unhooked me from the harness.

The robber looked nasty.  His teeth weren’t clean and he wore a knitted black hat, like a teenager.  He was a thin guy and had a nasal voice.

The robber said to another man who looked older, “Look here.  I took this puppy for us to sell at the market.  We need cash badly.”

The robber was at the bottom of a hill and we walked slowly so he wouldn’t notice us.

I leaped at them and tackled the robber.  I bit him on his arm.  Jason grabbed the puppy that was in a small truck, ready to leave for the market.

The robber moaned in pain from my bite.  The older man tried to punch me but he slipped on the ice and fell on his face. Both of them ran away and abandoned the puppy.

I licked the puppy to see if he was all right.  The puppy barked and said he was glad to be rescued from those evil guys. We put him into the sled next to Jason. The puppy cuddled up on Jason’s lap.

I pulled the sled over the hill, through the opening in the stone wall that we found on the way back. We went past the place where we saw the bear and the tall pine trees and finally we arrived back at our house.

Jason unhooked me and I carried the puppy in my mouth back to the rest of the litter. The mother barked in joy and licked me and the puppy. Jason smiled and said, “Good job, Sam!”

I went inside the house and curled up in front of the toasty fire and dozed off to sleep.

I'm a writer with an almost completed memoir, titled The Invasion. Most of the blog posts relate to the general subject of my memoir and are about my experience of Federal Agents entering my home and arresting my then-husband for child pornography, as well as the following two years of threats on me. There are also posts that are of a lighter nature and some to do with my travels, especially a trip around the world I took with my daughter. I have an MFA in creative writing from Fairfield University and live in Westport, CT.
View all posts by writerladyjane →
This entry was posted in Uncategorized and tagged Adventure, animals, danger, dog sled, outdoors, polar bear, puppies. Bookmark the permalink.