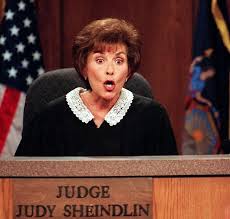 A few weeks ago, I received a phone call, one of the many, unidentified calls that’s usually a solicitation. I picked it up and then immediately hung up, to silence the ringer. But the phone rang again and it was the same number. Curious, I answered it. As soon as I said hello, a pleasant woman told me that she was a producer for the television program,  Judge Judy.

She said she was calling to invite me to appear on the show, where I would face my ex-husband Paul, and respond to his lawsuit, in front of Judge Judy and nine-million daily viewers. She informed me that Judge Judy is a retired Supervising Judge of the New York City Family Court and the justice that she deals out is legally binding. A few times, I’d seen her ream out one of the people appearing before her on TV. She scolded, permitted no whining and verbally whipped the guilty party. She was tough.

I listened to the producer’s whole presentation, laughing inside, a huge grin on my face.  Since receiving the Summons from the Small Claims Court, I fleetingly thought that this dispute, for money and plants, was the sort of ridiculous lawsuit that would fit well on the show.

Judge Judy’s producer told me that the way they find entertaining cases is to search lists of upcoming small claims suits, in courts all over the country. She also said that they would pay for me (and a friend) to fly to Los Angeles. A limo would take us to a hotel, which they would pay for. The next day, my friend and I would be driven to the studio in Hollywood and, if I lost, they would pay the $5000.00 to my ex-husband. I actually laughed, not at her, but because the situation was so bizarre. It felt like a comical, yet significant dream.

She implied that my ex-husband had accepted the offer and was willing to travel to California. This time, he could be a different kind of media celebrity, from what he was in 2005, when newspapers and television news programs announced his arrest for receipt of child pornography.

Amused at the absurdity of the lawsuit, I laughed to myself the rest of the day, walking around with a silly smile.

Then I stopped laughing.

In the mail, I received a letter informing me the date of the hearing and that Small Claims suits were held in the Superior Court. Me! I’ve never been to court (except to witness Paul’s arraignment) and before this, have never been sued. Until I opened that envelope giving me a real date, the threat of having Paul traipse through my garden making cuttings of what he wants and collect a $5000 check from me seemed like an amusing prank. I believed that the court would see it as a ridiculous demand and throw it out before it happened. I was wrong.

The date of the trial is scheduled for June 26th at 2:00 PM. This afternoon I wrote to the clerk of the court and requested a change of date, because I have a conflict. It’s the ‘Pass the Gavel’ party, where I will become the president of Westport Rotary. I also informed the clerk about the trip my grandson and I have planned right after the 4th of July.

I’m relieved that the event is postponed and I don’t have to anticipate driving fifty-nine miles to confront Paul right now.

While searching Google for information and comments from people who have appeared on Judge Judy, numerous sites showed up. They detail outrageous personal experiences people had on the show. I’m glad I won’t suffer a similar horrific event. http://www.consumeraffairs.com/misc/judge_judy.html

I’ll just have to wait until the trial is re-scheduled and learn what happens then. I’ll let you know. But it will be on hostileentry.com/- not Judge Judy.

I'm a writer with a finished memoir, titled Images. Most of the blog posts relate to the general subject of my memoir and are about my experience of Federal Agents entering my home and arresting my then-husband for child pornography, as well as the following two years of threats on me. There are also posts that are of a lighter nature and some to do with my travels, especially a trip around the world I took with my daughter. I have an MFA in creative writing from Fairfield University and live in Westport, CT.
View all posts by writerladyjane →
This entry was posted in Uncategorized. Bookmark the permalink.