Monday Night in the Emergency Room

Posted on September 22, 2016 by writerladyjane 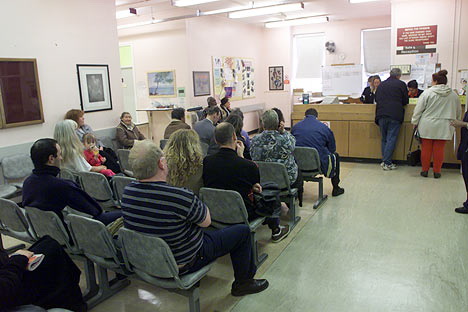 I remember being in the local Hospital Emergency Room with my elderly mother almost a decade ago. A couple of those visits were on a Saturday night and that was when the patients provided the biggest show in town. Drunks shouted for attention and those high on drugs often had to wait in the halls. Patients with severe mental illnesses hallucinated and argued loudly with long-dead parents.

There were always two or three beefy cops guarding someone who had run afoul of the law. I watched the police swagger back and forth while I stared at their guns and felt less safe than secure.

Almost a week after my knee replacement surgery, I was ordered by my surgeon to go to the Emergency Room. The physical therapist who came to my home to begin rehabilitation noticed I was short of breath; I needed a quick gasp after speaking only three or four words. The surgeon thought a pulmonary embolism was a possibility. So I stayed in the Hospital Emergency waiting room, this time as a patient.

Maury and I sat there for three-and-a-half hours before there was space in the actual Emergency Room. One medical technician stated that that while Saturday night might have the most drama, it was Monday night that was the most crowded.

During that time, I was able to observe antics, suffering and goings-on in the space where people waited, hoping to be seen by a doctor. A heavy-set older man was trapped in a wheelchair. I could see that a rash covered his swollen, lower legs, as he wore shorts. A cotton blanket partially wrapped around him for warmth in the frigid air-conditioning had become tangled in the foot supports, so he couldn’t stand up or move out of the wheelchair. He grew angrier and angrier at the long wait, calling out to the medical personnel behind the counter in front of the waiting room. No one helped him and he had no friend with him to assist. A few women, sitting behind the counter listlessly answered that they couldn’t help him and eventually one woman, tired of his plaintive calls, said she’d call for help from someone in the Emergency Room itself, so he could move the twenty feet or so to the bathroom. But no one came.

I also called out to those behind the counter stating that the man needed help. No one responded. No explanation was given why they couldn’t help him. Perhaps some regulation prohibited them from leaving the desk, but if that was the case, why didn’t they say so? The insult and inhumanity towards him seemed heartless and unforgiveable. With my recent surgery, limited mobility and walker, I was unable to help.

All charged up, the man seemed even more incensed and frustrated. With assistance from Maury, he removed the tangled blanket, stood up and stomped to the bathroom, his face red with fury.

Just as this drama quieted down, a child entered the ER waiting room. A boy, who appeared to be about eleven or twelve, with shoulder-length light-brown hair, pushed a wheelchair in front of him. All his attention was focused on licking a treat – perhaps a Popsicle.

The woman in the wheelchair, who looked to be in her sixties, was curled up in a fetal position. Thin and pale, she whimpered fearful sounds. The boy stood there by the hospital sign, not paying her any particular attention. He acted as if being in charge of a woman in a wheelchair was nothing out of the ordinary.

The sign where they stood announced that they should wait at that spot until the authorities invited them to step up to the counter, to check in. The boy made no signal to indicate he wanted help and no one spoke to him. He focused solely on his snack.

I stared at the two of them, riveted by what was going on, amazed that no one in authority saw a child and what appeared to be a noticeably disturbed woman.

Again, unable to keep quiet, I called out to the women behind the counter. “There are people waiting here who need your help.”

A woman looked up and with her hand, motioned them to move to the counter. I couldn’t hear what words were exchanged, but nobody seemed to be distressed that a minor was taking care of an adult woman. Perhaps they had seen her before. Maybe they knew she was seriously mentally ill. I could only guess.

Someone finally put a hospital bracelet on the woman’s painfully thin wrist. I was shocked to hear her give her birthday as 1971.They found a chair for the boy to sit. Next to him, the woman in the wheelchair, coiled up even tighter in a ball, hiding from life, from everyone there.

I never found out if the boy was her son or anything about her. The authorities seemed to treat them as business-as-usual. Perhaps they were frequent visitors to the Emergency Room. But who took care of the boy? She was in no condition to do so. I worried about them then, and still do.

I think of them often, hoping that other family members or social services were able to really help.

(It turned out that surgery had caused my shortness of breath, and my reaction – sticky lungs, or Atelectasis – was common. I didn’t have a pulmonary embolism.)

I'm a writer with an almost completed memoir, titled The Invasion. Most of the blog posts relate to the general subject of my memoir and are about my experience of Federal Agents entering my home and arresting my then-husband for child pornography, as well as the following two years of threats on me. There are also posts that are of a lighter nature and some to do with my travels, especially a trip around the world I took with my daughter. I have an MFA in creative writing from Fairfield University and live in Westport, CT.
View all posts by writerladyjane →
This entry was posted in child caring for adult, drug or alcohol abuse, hospital emergency room, hospital personnel, knee replacement surgery, mental illness, Uncategorized. Bookmark the permalink.

2 Responses to Monday Night in the Emergency Room